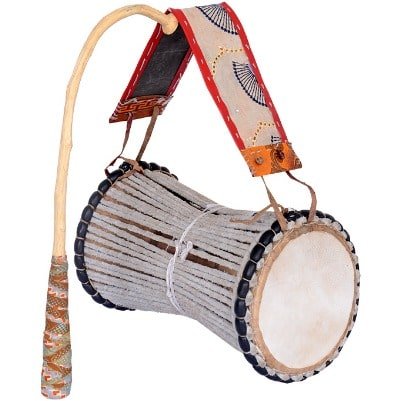 Music is an entertaining aspect of societies. Accompanied by musical instruments, lyrics are spiced to meet different tones, moods and appeal. In most parts of Africa and the Caribbean, drum transcends beyond just a musical instrument, but has formed the nucleus of their social-cultural lives.

Revolving around spiritual, social and cultural aspects of African societies, the drum holds huge significance to Africa. To the Yoruba ethnic group of Nigeria, the talking drum can be likened to the Samba instrument of Brazil. In social gathering, seeing a man, with a drum strapped to his shoulders, or held in his armpit is not a rarity.

For from the twaddle of the leather strings fastened around this hour-glass shaped instrument, energetically beaten with a finely curved carved wood, emanates fascinating sounds sending crowds gathered to witness a feast into a merry state. Such is the impact wielded by the talking drum as it sends feet thumping, gowns flowing in the air, body mass unfettered from a lethargic disposition to an energetic display of dance, through the reproduction of tones, imitation of lines, speech or words of the Yoruba language.

The talking drum derived its name through its ability to imitate human tone when manipulated by its handlers. Historically traced to the old Oyo empire, at early times, the talking drum served the purpose of recanting the history of the predecessors of the incumbent Alaafin. Through recitation by griots who were local historians, serving the purpose of reminding the regent of his spiritual and traditional duties to the people, the history of the people are preserved in songs, poems and Oriki’s.

In ancient times, when wars of conquest were predominant between sub-ethnic groups, the drums were used as instruments to rouse the morale of soldiers, announce death or sorrow which has befallen the people. At ceremonies, the talking drummers recite the Oriki’s of notable individuals, tracing their genealogy while entertaining them. Notable events and witty saying of the people were blended with songs by these local entertainers.

In recent times however, the talking drum has assumed the position of an instrument for entertainment and spiritual purposes. The presence of important personalities at festivals are also heralded/ announced through drumming.

Today across the seas in the Caribbean, through acculturation, the talking drum has not only birthed other forms of musical instrument but has also constituted a major musical instrument to the people, years after the demise of the progenitors. 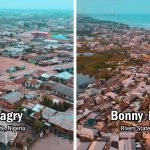 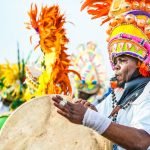